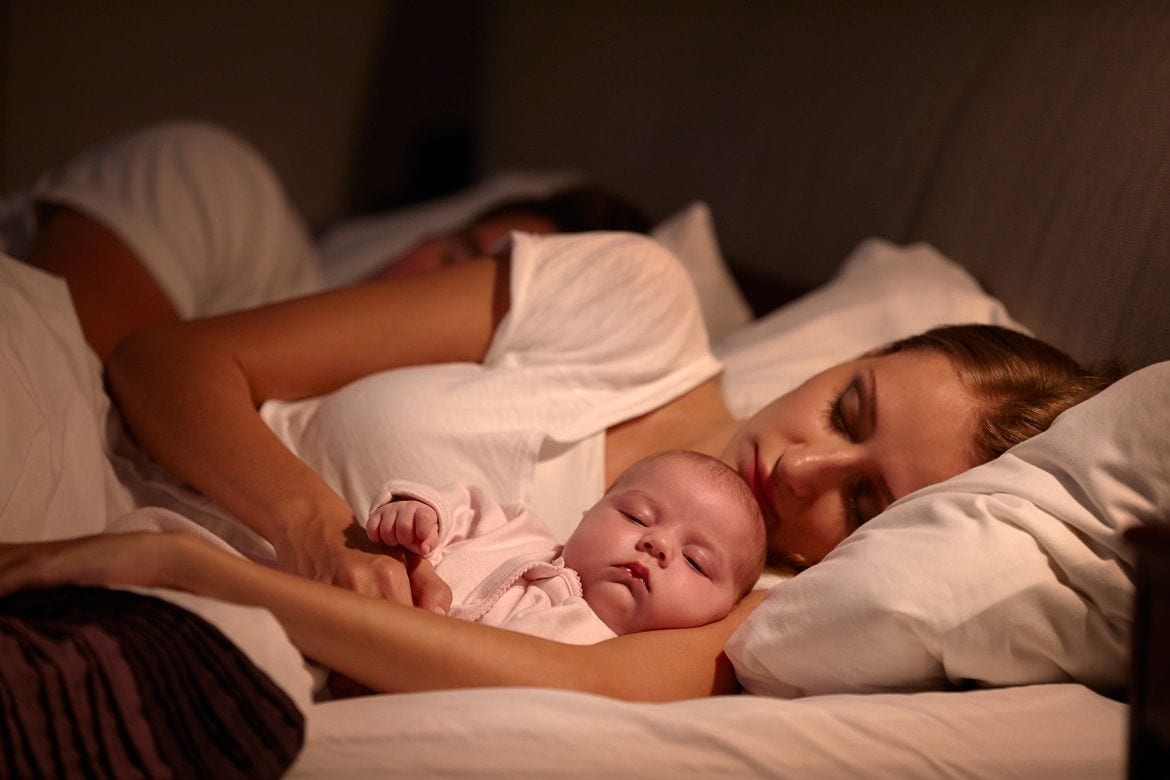 They say that there are parents who share beds with their children and those who don’t admit they do. Question: why don’t they? Why is co-sleeping such a controversial subject?

Let me get things straight: I’m not going to convince anyone to co-sleep or not. In each family the situation is different as are the children, parents, and their needs. What is an excellent solution for one home, in another becomes a source of problems. But such choices should be made consciously. That’s why I’d like to take a look at the most common objections that parents have against co-sleeping.

First, let’s discuss what it actually means to co-sleep with children. There are several commonly practised variants of family sleeping.

1.      Parents in their bedroom and their child in a different room of their own.

2.      Parents in their bedroom and the child’s bed near their bed.

3.      The infant sleeps in a bed designed to be set next to the parents’ bed (sidecar arrangement) – there are two beds, but they’re not separated by a rail etc.

4.      The child falls asleep in their own bed, but sooner or later during the night they end up in the parents’ bed.

5.      The baby sleeps the whole night in one big bed with parents.

6.      The child sleeps with one of the parents (most often with the mother), while the other parent sleeps separately – alone or with an older child.

7.      A whole room is adapted for a large bedroom with a lot of sleeping room (e.g. mattresses placed next to each other) and everyone, parents and children of different age, sleep together.

I’m sure you’ll agree that’s a lot of options. In reality, there are even more – in a lot of homes the night is the time of migration between beds and couches. It’s also a continuous dilemma: whose needs are the most important this night? At the moment should the child have the best possible conditions? Or should the mother regenerate her strength? Perhaps dad should get some sleep, because of an important task in the morning? Or maybe parents should spend some time with each other?

When deciding whether we should sleep together or separately, consider the opinions of experts and experienced parents.

When a child is born to the world, they leave the mother’s warm, safe womb. It was a hot, cramped and moist place, where blood whooshed in veins and air in lungs, and where muffled voices of parents could be heard. After the birth, everything is different: an infant’s world is empty, spacious and quiet. “I want that feeling of safety to come back,” we could translate the child’s crying, when they’re still fussing even though they are fed and changed. No wonder they want to be close to their parents. The contact with mum’s or dad’s body soothes them, the child’s heartbeat and breathing slow down, muscles relax and the little one falls asleep. They can smell the familiar scents of their mother and breast milk, hear the rhythmic breathing, warm with her body’s heat.

As all other mammals, a child needs to be close to their parents. Although most reptiles are on their own after hatching (a lizard goes looking for food right after leaving the egg), newly born mice, cats, rabbits or apes need their mothers. A human child is completely helpless alone. Pregnancy takes 9 months and ends when the child can survive outside the mother’s system, but only if she takes care of them. (If it was longer, the child would be more developed, but too large for a natural birth). Not surprisingly, the baby wants to be sure that mom is always nearby.

Sleeping in the same room is safer

There is an affliction every parent fears. The “Sudden infant death syndrome” (SIDS), also known as sudden unexpected infant death (SUID). It’s a rare situation when a supposedly healthy infant stops breathing while asleep. Medicine is still unable to fully explain this phenomenon and research is based on case studies and statistics. One thing was determined successfully – sleeping position matters! Infants should sleep on their back because it’s safer. However, studies don’t give a clear answer on co-sleeping. If we look at Asia, where bed-sharing is commonplace, we’ll notice that SIDS occurs there more rarely than in the West (look here for information on Thailand). American paediatricians advise parents against sleeping in the same bed with children until they are at least 6 months old. At the same time, they emphasise that sleeping in the same room lowers the risk of SIDS by 50%! (American Academy of Paediatrics recommendations).

Parents who smoke should not co-sleep

All the studies on co-sleeping clearly show sleeping close to a child is dangerous and inadvisable if both or either parent are smokers. And it’s not about smoking in the bedroom – hopefully no-one does that – but about the presence and breath of such people.

If parents take their child to their bed, they mustn’t be under the influence of other substances that impair awareness, such as alcohol, drugs, psychoactive drugs. Sober parents intuitively put children in the bed in a way that offers maximum safety. But those “who’ve had one” – don’t.

Sleeping close is good for nursing

Even opponents of co-sleeping admit that having a child close makes nursing easier. Obviously, it’s much easier to feed the baby while dozing in your warm bed as they eat, than endure the uncomfortable armchair next to the cot and then pray the child won’t wake up when you put them down on their mattress. Instead of writing why it’s easier, I’ll show you an example of what a family experienced. The parents decided to note down every feeding, activity and nap their child had between the third and seventeenth month. Blue denotes sleep, green – nursing.

As you can see, in the first months the mother who feeds only away from bed wasn’t going to get much sleep…

In some cultures everyone sleeps together

In our world people sleep in their rooms, in separate beds. But it’s not the only way of sleeping. In a lot of cultures, both nowadays and in the past, people have slept together. For the Japanese, the American or French custom of putting children to bed in a separate room is simply impossible to comprehend. So if parents are afraid to co-sleep with their children because “they shouldn’t,” they can stop worrying. There is no such thing as “it shouldn’t be done.” Some do it, some don’t. That’s all.

If a child shares bed with their parents, the bed must be adapted

Let’s say that parents decide to try and sleep with their child in the same bed. What things should they pay attention to?

Before deciding what your nights look like, discuss the subject. Early parenthood is the time when emotions flare. It’s easy to harm another person, make them feel unneeded, unwanted. The child is important, but so are you. The baby needs two loving parents, who feel happy and accepted by each other.

Some parents are anxious that when the child moves into their bed, it will mean the end of sex life. To this I’ll say: I’ve once found a thread on an Internet forum that concerned that subject. When I read where the parents whose children claimed their bed make love, I concluded that it might actually put a spark into the relationship…

Are they ever going to leave?

The last common anxiety goes like this: “If we start co-sleeping, they’re never gonna leave the bed.”

Secondly – this argument can be interpreted this way: “if you once show a child that they can feel safe and good with us, they’ll always want to feel like that” – Remember that children grow up. Their needs change, or the way they fulfil them changes. An infant wants to be close to their mum, because they know they’ll survive. A 4-year-old will be happy when their dad reads them a goodnight story, gives a hug, count all the stars in the sky… Then they’ll happily march to their own bed. A child brought up in closeness knows, even when asleep, that parents watch over them, even if they’re in another room.

PREVIOUSRead to Your Child Everyday, They will be Smarter
NEXTThe Causes of Tummy Aches