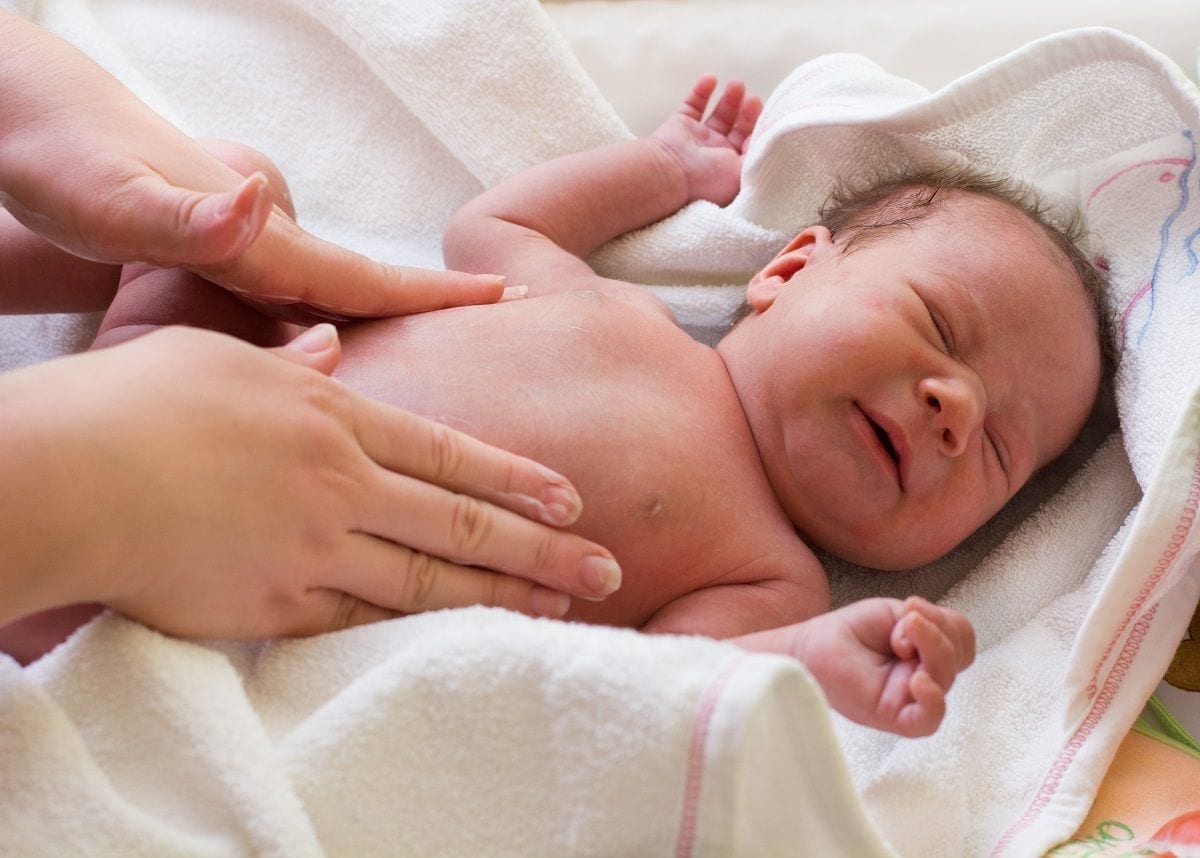 When an infant is unusually fussy, tense, stops eating – we suspect it’s a tummy ache. It’s not always a typical colic and sometimes the causes are easier to recognize. So, what are the causes of a tummy ache?

First of all, bear in mind that a newborn’s digestive system is not yet fully developed. It’s completely normal for a baby to have tummy aches. Usually, it’s enough to help them a little, soothe and patiently wait for the baby’s body to get used to living on this side of the womb.

During pregnancy, children get their food through the umbilical cord. Only after birth do they start taking food through the mouth, digest it, and defecate. The entire long digestive system begins to work. It’s completely natural for it to have a few temporary hiccups while it gets up to speed.

First of all: it takes time for a baby to learn how to eat, combining breathing, sucking, and swallowing too. Secondly: their oesophagus has to develop, also the lower sphincter which holds the stomach’s contents. And finally: intestines are also learning how to move food and are slowly developing the right bacterial flora. When the time comes for food other than mother’s milk, the bowels will need to practice digesting new things as well. And if a child is not breastfed, they will need to cope with digesting baby formula.

Breast milk is more than just perfect food for the baby. Its active biological ingredients, which are impossible to recreate when producing a formula, speed up digestive system development. That’s why it is a good idea to breastfeed also (or maybe – especially!) when your little one has tummy problems or colic. No other “special” formula is better than mother’s milk. Children cannot be allergic to it. Very rarely may a child be sensitive to a particular element of mother’s milk, but even then it’s better to breastfeed than switch to a formula.

Only in the case of diseases such as galactosaemia – a genetic metabolic disorder affecting the ability to metabolize galactose sugar (not lactose intolerance, which is quite common among adults andcauses a stomachache after drinking unfermented milk) or when the mother has tuberculosis or is seropositive, constitute a situation when special, prescribed food is required.

In most cases, there are other causes for an infant’s tummy ache than the ingredients of mother’s milk. Conversely, some problems may be a result of the baby formula used.

If there are cases of allergy (atopy) in the family, breastfeeding is recommended, because mother’s milk helps “repair” the immune and digestive systems and get rid of allergy symptoms faster.

If breastfeeding is impossible, an HA formula is recommended, which uses hydrolyzed cow milk protein.

However, if an infant has been diagnosed with cow milk protein allergy, HA formula is wrong for them because it will trigger allergy. In that case, a doctor prescribes a special replacement – an extensively-hydrolyzed formula that breaks casein into pieces (casein is a cow’s milk protein). These formulas don’t smell or taste too good, but children usually grow to accept them. In rare instances, allergy symptoms remain even if children are fed these special formulas. In that case, you need a special amino acid-based formula, where cow milk protein is broken into the smaller elements, the amino acids.

A tummy ache may have non-allergic causes. Artificial formulas are more difficult to digest than mother’s milk and may lead to constipation. Children with problems like that can be fed modified, over-the-counter formulas that soften the stool and are usually labelled as such. They include pre- or probiotics and slightly different ingredients.

Breastfed babies only rarely suffer from constipation. Constipation means a situation when the stool is hard, dry, and difficult to pass. It is normal for an infant not to pass stool for several days. Two to four-month babies have the same pooping routine: nothing for a few days, then a nappy spill-over. Passing so much poo is a hard job, but it is not painful. Moreover, babies may have gas between defecations. To help the baby with that problem, lay them on the stomach often and delicately turn over, change positions, encourage to play. A warm compress on the stomach also helps, as well as delicate massages and carrying in a sling. If nothing helps, a rectal catheter may need to be used.

Tummy aches may be also caused by the air a child gulps when feeding – and then suffers from flatulence. To avoid that, you need to:

If an infant is bottle-fed, either with natural milk or formula, you should use a slow-flow nipple and make sure that the milk fills at least two-thirds of the nipple during feeding; hold the baby in a half-seated position, and make sure they burp afterwards.

Occasionally swallowed air irritates an infant right after they begin to feed. They attack the breast, start feeding, but then release the nipple, cry, turn away, their body tenses. If it happens, stop feeding, hold for burping and try again. Sometimes, the procedure needs to be repeated several times. A hungry baby is anxious and can’t focus on feeding. If that’s the case, make sure the room is quiet, dark, hug the baby close. The infant will also feel better if the mom calms down, even if it’s after a cup of herbal infusion. Sensing their calmness, the baby will manage to grab the nipple right and get full.

If nothing helps, seek advice from a midwife, lactation consultant, or breastfeeding promotor, who can check if the baby is held correctly, because many problems are caused by a wrong feeding position.

If a baby is tense, fussy, doesn’t like to lie on stomach and often possets, we can assume it is because of reflux. It is a completely natural situation: small children’s lower oesophagus sphincter is still underdeveloped and acidic stomach content is brought back up to the oral cavity. It’s quite unpleasant. To help the baby, hold them half-upright after feeding, half turned towards you, so that your chest supports their side. You can also put the baby across your thighs (as explained above), so that nothing presses against their stomach. If posseting happens especially often, before feeding mix a little of thickening formula with the mother’s milk; children who don’t breastfeed can get a special formula labelled A.R. Unless posseting is accompanied with little or no weight gain, you don’t need to worry about anything except making your baby comfortable. Slow weight gain caused by heavy posseting requires treatment (reflux disease, or GERD).

Every situation in which your baby suffers from pain or discomfort needs something else: parents’ attention, closeness and tenderness. An infant in pain is afraid. They don’t know that the pain will soon pass. They need a familiar smell, warmth, and voice to soothe them. Each time you react to their crying, you’re doing something important and valuable for their emotions. Psychologists are certain that the bond we have with our parents when our life is just beginning, whether we feel safe and calm with them, affects our entire future.